A collection of episodes out of the amazing kaleidoscope of my life.
Luckily they are not really lost

All in Good Measure

The saying is widely known: All in good measure.
But how do you know the right measure? We sure didn’t, although I should have had a hunch.

This was the first year in our new home: Canada. We had moved right to the most northwesterly territory, the vast and wildly captivating Yukon.

We, that is me, at 36 years with a linguistics degree in the pocket and my heart yearning for wide-open spaces, freedom, and wilderness. And my partner, Rainer, certified air conditioning and heating engineer, smart, athletic, and funny, capable to repair everything, paddle every river, and – as we would later discover – the best log builder in the world. Germany, the country we were born in, was not giving us what we thought we needed, so we had started traveling. Looking and searching for something that would give us a higher purpose in life. Then, Canada appeared, and we got infected. Infected with the desire to live in the high north.

There was no holding us back. We went and emigrated to a New World: Canada.

So, here we were – in Haines Junction, gateway to Kluane. Placed at the foothills of magical St. Elias Mountain range, the village of Haines Junction connects the Yukon with the Alaskan seashore to the south or the interior of Alaska to the North. We could not have downsized any more, coming from a population of 800,000 in Frankfurt, Germany to this remote, quaint place housing some 600 inhabitants. However, the landscape more than made up for the lack of people. Here, steep rock walls rise to heights of several thousand metres, cross-stitched with glaciers and icefields, hiding Canada’s highest peak, Mount Logan within its guarded depth of the National Park.

For the first two years, we were running a large highway lodge, Mountain View Motel, which included a restaurant, motel rooms, two gas stations, a small trailer park, and an automotive mechanical shop, the latter, luckily being supervised by a good friend of ours. We had arrived in June and hit the tourism season running. Sometimes running so fast that we lost control. Unexpectedly, we spent more time in the din of this place than, as we had hoped, out in the exciting and wild back country. Stressed and frustrated about it, we tried to keep our heads above water. Those were challenging times, to say the least.

In a good month, we employed ten employees. A good month being when we did not encounter the quantum-sized staff turnover (or better named staff-runaway) which we learned was common in this industry. Staff moved on with a regularity of migrating birds, only faster. Because of this, everywhere job vacancies appeared, giving this roundabout of employment further fuel. Although we were supposed to be mostly supervising the whole outfit, I often spent ten to twelve hours in the restaurant, helping, baking or waitressing. Rainer was regularly needed at the pumps supplementing for a no-show gas jockey. Other days, he was busy repairing something, anything, from freezers to dishwashers to the electricity in the motel, at the pumps or in the laundromat. (Oh, I forgot to mention the laundromat, which in the winter regularly broke down when customers left the doors open, so the pipes froze solid.)

In Germany, we had never had employees, we never were managers, and aside from my short stint, post-University, waitressing at a Swiss restaurant, neither of us had any experience in gastronomy.

I still don’t know what had possessed us when we agreed to take on this position.

It must have been some residue of youth when you are convinced you can do anything. But also, it was the start of living in Canada. And really, at thirty-some years, we weren’t exactly youth anymore.

And the consequences showed up clear and loud. Constantly reminded at our lack of experience, often been taken advantage of, and unfamiliar with the current employment situations and ethics put a dangerous strain on our relationship. We were both strung so tight like violins that have been left in the sun too long.

Because over my whole life I had been troubled by “lip cold sores”, always breaking out when stressed or overworked, I kept a valuable salve to treat them. The salve had always worked its magic.

After an extra-high amount of stress and trouble, big blisters had developed on my lips, itchy and uncomfortable. When I administered the ointment, an irritating rash spread all over my face. Apparently, I had grown allergic to the ingredients. It became worse, and I was contemplating whether to consult the local nursing station, when, suddenly, Rainer burst into our home.

“I found someone who knows what to do.” His excitement was bubbling over.

Jenny happened to be our room maid, a local Indigenous lady. Very quiet, very calm, competent, and reliable. Rainer had mentioned my predicament to her when he saw her coming out of one of the motel rooms, she was just finished cleaning. He brought her over right away. Quietly, she stepped behind Rainer into our house. Jenny’s confident composure gave me hope immediately. She sat down across from me on a chair, hands folded in her lap, and her raven-black hair falling back over her shoulders, nearly reaching her waist.

She looked at me and nodded. Yes, there was a remedy, a natural potion, that could help, found in the wild.

Rainer and Jenny agreed to venture into the woods to gather it.

A few hours later, they came back with a thick alder stick, the length of my arm with which to make a healing tea. Its antiseptic ingredients should take care of my pains within hours.

Jenny left Rainer to brew the tea. While impressing on him that the drink would be bitter, Jenny insisted that I needed to drink a whole pot. Some honey to sweeten the brew would be allowed. Then she left. After a long day working at the motel, she had taken her time to help us and was now on her way home.

By that time, I felt so miserable, I was convinced I would drink just about anything to get better. Nothing could taste that bad! Certainly, it would not be worse than the bundle of white maggots I had consumed once – in tequila – to win a bet, years ago. In the old country.

No, I was not afraid.

Rainer prepared the tea in our kitchen and brought it to me, while I was relaxing on the living room couch. He had an expectant smile on his handsome face, his brown eyes glinting with pride. I took the mug, steaming hot, filled to the brim. Its smell vague and foreign.

I expected bitter. But not that bitter. And I failed. I failed miserably. I could not drink it. I desperately tried a couple of sips, then gave up.

Rainer, disappointed to the bones with his first attempt at healing with natural remedies, tried to make me drink more. Eventually, he sat down beside me and reluctantly took the cup from my hands.“But she said you need to drink a whole pot!” Thwarted expectations tuned his voice sad.

Next morning, Jenny knocked at our door. Wanting to see how the patient was doing with the wonderful medicine.

Rainer did not wait long to tell her how the procedure had failed.

Her wise face showed no emotion, neither disappointment nor anger. Then knowledge and patience stole into her dark eyes. I was not reprimanded.

Quietly, she turned to Rainer and asked for the stick, so she could brew a new pot of tea herself.

“What stick?” Rainer was surprised.

“The one we gathered yesterday.”

The stick was meant to last a week with daily treatments of a pot at a time.

Rainer was out the door so fast, the virtual daggers from my eyes missed him, hitting the empty door frame instead.

The measure must be right. 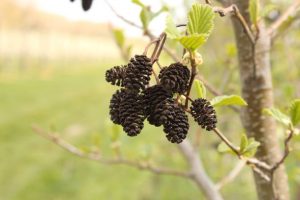 More episodes
Other publications
You can leave a feedback here.