” While the expatriate is merely living away from his or her homeland physically, the “ex–patriot” has evidently distanced him or herself emotionally. (Washington Post, Letters to the Editor) “

So, there is both.
Expatriate and Ex-Patriot. I guess I qualify for both, sorry to admit it.

I grew up in one of the most sprawling city of Germany, Frankfurt, sharing it with 80.000 other people. I did not mind until I got older and started traveling. That was when I saw what the world had in store for me. Besides Frankfurt. Or Germany.

Whenever my University studies allowed it, I explored Europe, in a self-remodeled old VW-van, as was the fad in those days. Rumbling through Italy, France, Spain and later most of Yugoslavia, I was inundated with new impressions of this hot and spicy, relaxed and friendly South. Later we sailed as a group across the waters of the Mediterranean and Adriatic Seas, getting flooded with the feeling of border-less freedom, anchoring in new harbors every night.

At one point flying was added to the means of travel and I discovered the exotic outlandishness of the Orient, soaking up mysterious smells and tastes, while connecting with strikingly foreign people and landscapes. All culminated in the narrow back streets of Hong Kong at the shores of the South China Sea.

I knew I was hooked on traveling. But there seemed to be more. The reason of being drawn away from home continuously, became clearer: I was looking for something, something different, something I had not found, yet.

My older brother delivered the break-through. On his proposal we planed to see Canada. I had no idea what was going to hit me. But I vividly remember that first day paddling our canoes across Opeongo Lake, smack dab in the wilderness of as a group. I was stunned: “This is just like a Lassie Movie. And I am right in it!” The doors to an unknown dream had just opened. Canada. I was determined to live there.

And I did. 5 years later, after more traveling, paddling and hiking, which steered me from interior Ontario to British Columbia on the West Coast, then up north into the Yukon.

Then – all of a sudden – I arrived. I landed. In 1993 I finally immigrated to to Canada and left Germany behind. I left my job behind, my place, my family, and all my friends. Everything. And I did so with a mortifying ease, that stills thrills me. I immigrated to this great land and I loved every single minute of it. Never looked back.

While becoming an Expatriate, living away from the country I was born in, I also became and Ex-Patriot, by not missing my native land at all, at any minute, ever after.

Julian’s Revelations of Divine Love (about 1393) is believed to be the first published book written by a woman in the English language.

In spite of sounding like the most boring cliché, I did know what I wanted to become since earliest childhood.

In grade 4 I was convinced my future as a veterinarian was solid. I talked about it all the time. I even had a companion who  seriously volunteered to be my sidekick, when the time would come. We were both ten years old.

After nine years in High School this believe was still going strong. By then I had decided to become a country vet. Not even the discouraging discussion with our head master, who thoroughly questioned my abilities to deliver an unborn calve, could sway me.

However the globe’s overpopulation, or if I am very honest, my insufficient studies, put an end to all this. In Germany too many people had the same idea. The Numerus Clausus was invented as one method to limit the number of students who may study at a certain University. Smarter people than I, with a better average of final marks in high school, were admitted. I looked at a four year waiting period and then looked no more. In those four years I was able to complete my study in Linguistics. I left Johann Wolfgang Goethe University in Frankfurt with the degree of M.A. in Modern Philology in my pocket and my eyes still roaming the horizon.

Because, in the meantime, I got myself infected. With traveling. I traveled a lot. All over the globe, looking for something I did not know, yet.

But I could not find what I was I was looking for, so I went to work in an American Computer Consultancy. For the next six years the just emerging home computer fascination captivated me like nothing else. I worked overtime, I worked on weekends, sometimes without pay, at home on my (first) own computer and at nights. We all did. And we loved it. At the company, we were all under the spell of this radically new technology developing and swallowing up everything old and close to a type writer – or mainframe. In those days, the late 80’s, a PC, lovingly for personal computer, probably weighed between 10 – 20 kg, including a monitor the size of a small dog house, and two 5″ inch disc drives, when innovation swept us away with the coming of 3.5” disks and later, hallelujah, the first hard drive with an intergalactic 128kb of RAM, which was soon, we hardly survived the joy, upgraded to 256RAM. No Windows, No OS, we all worked with the florescent green C:> on a dark background.

However, we felt like visionaries. We soaked up everything that came up on the USA market. Our boss being an American brought the newest developments and gadgets (such as a handheld scanner) into Germany, and we presented these innovations brand new to the European Industry. We were breaking a path to a new intelligence, which toady would be sneered at as crude and archaic. Those were the days.

And then Canada came and my days in Europe ended.

I had set my mind that, once we landed at Vancouver Airport, I would kneel down and kiss the blessed ground I was going to live on from now on. Just as the pope does.
Naturally, I did not. I chickened out.

Immigration officials grilled us for an hour, despite our legal papers showing that we were allowed to come and live here indefinitely, or at least as long as we did not commit a capital crime.

My documents presenting an education as linguist and work experience of an computer consultant, inspired one of the immigration officers to the question, if I knew how many secretaries already lived and worked in Canada. Well, I did not know that, and even the realization that it might a great multitude could not take the joy away from me.

The intoxicating joy of finally having come to my personal paradise. Canada. I was determined to not let anybody ruin my happiness.

Although the highway lodge we operated for the next 2 years nearly did just that. Ruining it for us. Luckily we were able to divert fate’s cruel plans and made her twist another pair of strings under the tree of life.

In 1994 we left the utterly uninspiring realms of highway hospitality service and started our own business as wilderness tourism outfitters. Yukon Wild Adventures was born, and with my husband Rainer Rusmann we invited and guided guests from all over the world through our new beloved surrogate country, showing and sharing the Magic and the Mystery of the Yukon, Canada’s True North.

We had come directly to Canada’s most northwesterly region, with Alaska as our neighbor, the Arctic Circle dipping right through us and the small crown of arctic waters above our heads. We had purposely selected a major wilderness, where nature and wildlife still runs supreme, where the population of some 25.000 people inhabiting an area of over 480.000 km2 seems more than negligible. Really – when 80% of this population lives in its capital, the rest of the land presents itself as one vast open space and wilderness refuge.

And that refuge became our playground, our office and weekend escape. We hiked, we paddled, and we camped and rode on horseback. We crossed ice blue lakes and floated down wild rivers. We scaled mountains without names and wandered through endless, untamed valleys. We did it alone for our personal enjoyment. And we did it with customers to make money, still enjoying it – to some extent.

For 15 years our life was simpler, more back to basics, bringing in our own water, hauling wood heating the log house we build ourselves. We hunted in the fall and picked berries and mushrooms. And when winter came we relaxed among a world of brilliant white under the diamond air of the North, illuminated at night by the unworldly displays of the Aurora Borealis. 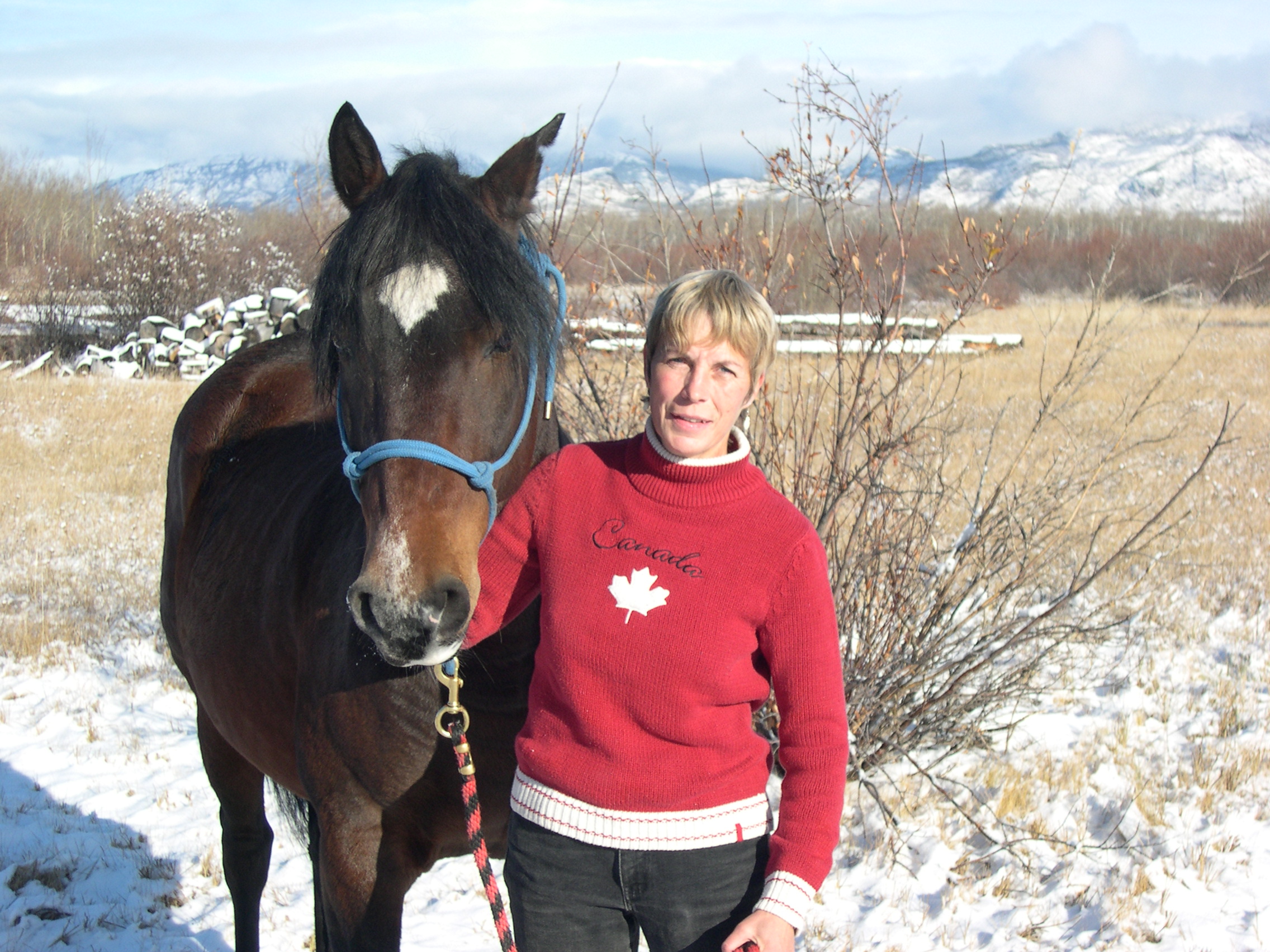 Every time I look at myself I wonder:
” Who am I?” I feel I am so many things.
Immigrant, guide, entrepreneur, archer, hunter, writer, …

Have fun reading and getting to know me better!